Tales from the Field: The Power of Words

“¡Hola! ¿Como te llamas?” My Spanish may not be perfecto and my accent is likely atrocious, but after greeting child after child with the expression, “Hello! What’s your name?” I was feeling pretty confident in my ability to communicate the sentiment.

When my inquiry resulted in a blank stare from one of the children in Párvulos (Kindergarten) at Pasín, I was confused. I thought, “Maybe she’s just shy.” I turned to the child seated in the desk next to the first and asked, “Y tú, ¿Como te llamas?” Again, I got no response. Then I realized why these children weren’t responding. It wasn’t out of shyness or because they couldn’t understand my thick English accent. They simply couldn’t understand Spanish. They were raised in the native language, K’iche. 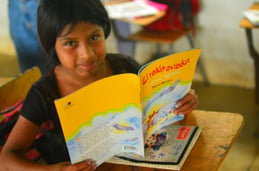 Spanish may be Guatemala’s national language, but the indigenous population maintains a strong presence in the country, especially in the more rural areas. This Mayan culture is evident in the gorgeous traditional clothing that women wear, the delicious traditional foods that families eat, and the unique traditional language that people speak.

Fathers often have the chance to learn some Spanish through their work, but women and children, who remain mostly in the communities where all their friends, teachers, and family members speak K’iche, sometimes do not learn the more universally understood language of Spanish.

This fact is interesting, and has both positive and negative results. On the one hand, to uphold cultural tradition is beautiful. The children whom I asked, “Como te llamas,” have roots in their current culture that date back over 2,000 years. They offer a look back in history and share with their community a sense of identity that Americans so often struggle to find. To learn Spanish could be perceived by some as the first step in losing this rich culture.

On the other hand, to speak a language understood by only a tiny portion of the people is limiting. It is difficult to find a job in the world outside of your home community if you cannot communicate with potential employers. Like literacy, Spanish is a tool that opens doors of opportunity. 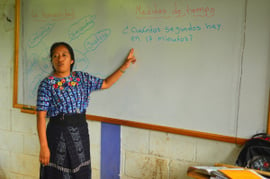 The Parvúlos children spoke little Spanish. The two sixth graders at Pasín, however, were able to communicate fairly well with the Spanish they had learned in school. Although the acquisition of Spanish is a point of contention in communities for reasons I’ve explained above, I view this progression from the younger to older kids as a really good thing. By teaching Spanish, the school is giving children the ability to make a choice. Children may choose to remain in their communities, speaking K’iche and observing tradition, or they may choose to get out and pursue other dreams, which is made easier with the skills of Spanish and bilingualism. Either way, the kids will ideally have the freedom to decide their paths, and this is what education is all about.