Tales from the Field: A Beautiful Devotion

Today is August 9, the International Day of the World’s Indigenous Peoples. Today is also Keb Aimagi in the Mayan Calendar, a holiday dedicated to asking god for forgiveness of sins. Today is the day I got to celebrate the former by learning about the latter, and what a day it was! 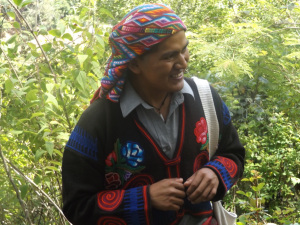 Mayan religion is beautiful, age-old, and—until this morning—unfamiliar to me. I won’t need to claim ignorance anymore, though, thanks to Victor Tecum, a School the World parent trainer with deep roots in Mayan culture. He took us through the town of Chichicastenango to show and explain different aspects of his religion, which about 20% of the region practices. 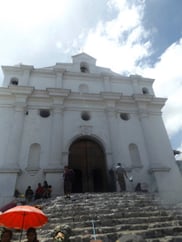 We met at a Catholic church. “Strange,” I thought, “we’re supposed to be learning about Mayan religion, not Christianity.” I didn’t realize that, ever since Spanish colonization, the two have been inextricably linked in Guatemala. It turns out that Mayan slaves built the church in 1540 at the will of conquistadors, who believed it their mission to spread Catholicism. Before then, a Mayan temple stood in the church’s place.

Nowadays, Catholics use the church for its designed purpose and Mayans use it as a reminder of the ancient Temple that it once was. As a result, the two faiths have mixed, and Catholicism has influenced modern Mayan religion. Both venerate Catholic Saints, for example.

Despite this European influence, Mayan religion has remained unique in many ways. The clothes that Victor donned had been passed down through generation and represented important concepts in the culture. Two directions of swirls on his shirt symbolized entering and leaving life. The swirls don’t end, though, because spirits live forever. Victor’s hat is similar to those worn daily by elders in the culture, who keep them on at all times so that wisdom doesn’t escape the head. This headwear can be removed only at night, when the mind rests. Tassels represent rain and knobs represent coming-of-age.

After discussing these traditions at the church, we headed to Pascual Abaj

—which translates from Ki’che to English as “Pascual’s rock”. A farmer in Chichicastenango, Pascual, saw a stone in the ground and began to dig it out. Thinking that it would be small, Pascual was surprised to find a huge rock in the shape of a human! Members of the community come to this rock, surely a sign of God, to give offerings. This, and other establishments such as the Indigenous Municipal Center and Mayan museum, represents a beautiful devotion.

Victor invited us to his home to finish off the morning and experience quotidian life for Mayan people. We drove up a rocky dirt road on the side of a mountain to a very isolated area. It would have taken a couple of hours to arrive via foot. I learned that Victor’s brother is a Mayan priest, and lives in the house next to his. Mayans come to his brother, Diego, constantly to connect with God, making the long trek in the name of their faith.

Today opened my eyes to a new religion I never dreamed I would get the chance to learn about. Victor fears that the religion is declining, but hopefully it will continue to endure the test of time. Happy International Day of the World’s Indigenous Peoples!