Happy 4th of July from Angel in Xesic, Guatemala

Posted by stw2015 on Jul 3, 2014 12:28:07 PM
Dear Friends,
It was my first visit to Xesic.  I was there with eight girls from the Sidwell Friends School, Washington DC this past March. They had come to help finish the school they had donated to the community.
We, the community so proudly told us, were the first Americans to visit Xesic. Except for Angel and his brother Giovanni of course.
"I am from New York!" he said proudly. Well, he wasn't actually from New York, it turned out.  But he was an American. From Los Angeles.
Angel's parents left Los Angeles and came back home to Xesic when he was four years old and his brother was two.  He was seven now and in second grade.
Angel didn't remember much about his life in the US, he said.  But as I watched him among his classmates, the impact of just those four years in the United States was undeniable.
He was just  so much more advanced, more alert, more inquisitive, more vibrant.  When I introduced him to the Mayor he quickly took the Mayor's Gatorade bottle and began reading the label to prove his reading prowess. 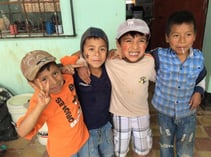 I couldn't help but wonder, was it prenatal care that gives him this huge advantage over his classmates? A better diet in the early years?  His community, Xesic, is on the government's high priority list for malnutrition.  Maybe a Head Start program he participated in?  Are there books in the home now?
"Solo el libro de Jesus Cristo," he told me.  Only the Bible.
I haven't figured Angel out yet. But I have been back twice to visit him since March. The first time to bring books (Angel was over the moon with the bilingual books!).  And again to check up on his teachers and make sure they were keeping him interested. Angel always asks about the girls from Washington, D.C.
But I worry about him. We need to work better, harder and faster if we are going to help Angel.
Sincerely,
Kate Curran
CEO and Founder
[feather_share]