Morgan Trevett traveled with STW in 2013 as a sophomore with classmates from Winchester, MA. She has continued work with School the World and now volunteers weekly in the office. 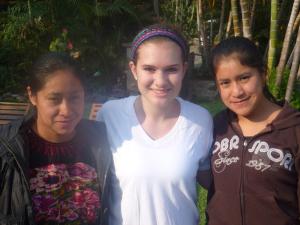 Last April, I traveled with School the World to Guatemala. It was by far the most rewarding and eye-opening experience of my life. My trip to Guatemala changed my perspective of the world. I realize how lucky I am; but also how similar people are if we take the chance to understand that idea.

Although it felt amazing to be able to help the people in the rural village we visited and provide a primary school for their children, it was the human connection I found there that really struck me. I had been learning Spanish in school for three years, but it was only after arriving in Guatemala that I realized how helpful it could be to know the language of another people. I always liked traveling, but I always felt there was a sense of isolation- being in a country and having no connection to the people in it, especially because of language barriers.

My first day on the trip, I struck up a conversation with my quiet STW bus driver (who did not speak English) about dogs. It was a simple conversation, but it turned a quiet stranger into a smiling friend. After that, I fell in love with speaking Spanish. While in the rural community I went up to dozens of kids to ask their names and how they were. Some would bashfully bow their heads and scurry behind their mothers’ colorful skirts, but others would answer, patiently deciphering my awful Spanish grammar.

It was these conversations and ability to communicate that made my experience in this other culture real to me. I have been able to continue a connection after I came home to Winchester with my friend, Magdalena Tiriquiz León.  Magdalena grew up in an indigenous village in Guatemala and now works for School the World teaching parent classes and attends a university in Guatemala. She only spent one day with our group, but, thanks to the wonderful world of Facebook, we have grown closer and kept in touch for the past year.

Magdalena went up against traditional Mayan custom and continued her education past 6th grade, against the wishes of her family, setting an example for her 9 brothers and sisters and all children in her village. I personally think that she is amazing for fighting for her education and helping others to do the same. Our worlds are so different, and I wonder if I would be capable of what she did. But, at the same time that I notice our difference, I see our similarities. We talk about our dreams, our interests, our friends, and it feels like I am talking to any other friend- just in Spanish, of course. Now that Magdalena has started learning English she is able to practice with me, too, as I practiced my Spanish with her. With this connection, my trip with School the World to Guatemala became about so much more than just volunteering for me; it became about bridging two worlds.