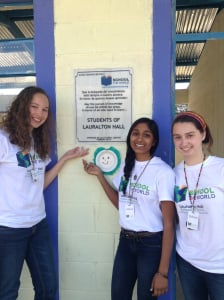 Kathryn-Rose Schaffer participated in her second School the World service trip in 2014. Kathryn-Rose is a junior at Lauralton Hall in Milford, CT. Kathryn-Rose and other returners from the 2013 service trip were able to visit the school they built the previous year. This is a letter she sent to update one of her 2013 donors on Cacabal II's progress.

...I wanted to thank you for your donation for my 2013 trip to Guatemala. I attended the trip this year as well to build another school in the village of Choaxan, located relatively close to Cacabal II—the village from 2013. Luckily this year I had the privilege to revisit the school and see its progression which was quite astounding! The school has and will continue to thrive. Many new children are attending and there was one child who was enjoying his second day of school. The teachers are well taught and help to provide the best education for the children. Your donation has helped not only to create the three-room building but sustain it as well. Originally, these children wanted an education within their village so they reach out to their mayor in hopes that he would provide one. In return, he reached out to Kate Curran—the founder of School of the World—and asked for her organization’s assistance.  As you can see these children and their parents’ desire to have their children’s need for learning fulfilled is very evident. The parents are a key factor to this process because they helped build the school and therefore have displayed their dedication. They belong to an older generation where the women are considered useful only in the domestic realm (sadly that belief can still be seen today). The men; however, were allowed an education due to their gender but with this organization we are empowering boys and girls—enabling young women to learn about their rights and be aware that they are able to exercise them. That is certainly happening in Choaxan. Girls picking up hatchets and hammers to break down plaster for a plaque or grab a paint roller and get themselves a little messy while covering the walls symbolizes the impact that we have made and I am extremely proud to bear witness to such an accomplishment. The men of course found the sight before them slightly odd but after seeing the girls continue they realized that these young women are capable of accomplishing many things far beyond the domestic sphere of the household. Empowering young boys is just as important and this 13 year-old Josué definitely embodies the importance of education. The first day visiting the village, he welcomed each one of us (a group of 13) and introduced us to his six siblings. An hour later he gave a speech to us and the village stating how grateful he was for the school. And as the week went on his actions truly displayed his gratitude but not just that—his potential. This young man is a kindhearted, compassionate, outgoing, intelligent, individual who helps anyone and everyone. After school ended one day, he and a few of his friends returned to the school to help us finish painting even though they each had an hours’ worth of chores awaiting them at home. He enjoys learning and absorbs just about anything especially if it’s English, they all do. The teacher had spoken to us about the students’ strong desire to learn English but he himself does not know the language very well. Ultimately, these kids deserve their education and with it do great things in this world. On my final note, since last year our group of 13 girls has expanded to 25, we contributed enough for the creation of two schools. Thank you so much for your donation!