Annie Kelly is a junior from Winchester High School. This is Annie's second year fundraising for and traveling with School the World.

When I was in Guatemala building this school, I did not realize the impact we had made until the day of the school's Dedication Ceremony. We got there, and the community had put so much effort into making this day happen; it was a massive celebration, something that does not happen very often in these communities. The effort and amount of work they put into this one day made me realize that we had made a difference, such a difference that they wanted to thank us with all their hearts. On the day of the Dedication, I made a friend. 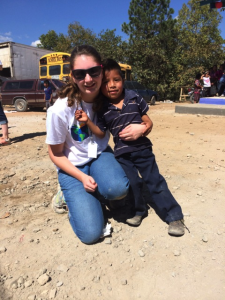 Although it was too loud to hear his name, we immediately had a connection. He was standing off to the side while we were all dancing and I stuck out my hand to ask him to dance with me. Tho boy reluctantly grabbed my hand and started dancing, and, soon enough, he would not let go. I was in love with this little boy the moment we started dancing. From that moment on, he was never out of my sight. We would make eye contact and he would shyly smile at me and then run away. While sitting down at the ceremony (before we were on stage), he was sitting on my lap. While we were on stage, he was right up at the front row and never left my side. I would look at him and he would look at me and then I would smile, and he would turn his head away and laugh. During the ceremony, I had to run off stage to use the bathroom really quickly. Low and behold, when I got out of the bathroom there was my little friend standing at the top of the hill waiting for me. He had followed me to the bathroom and that was just about the cutest thing ever. Then, when we were cutting the ribbon across the school's classroom door, he let me pick him up and hold him. When I had to go inside the classroom for a picture without the kids, he did not let me put him down. He grabbed onto my necklace and would not let it go. That was when I realized that I came to Guatemala for moments like these; moments that made me realize that I had made a difference in all of these kids’ lives. This little boy might not have realized exactly what we had done for him at that second, but he knew we helped him; he knew we made a difference. Moments with this little boy are the moments I lived for while I was there, the moments that made me understand that what we did mattered to everyone in that community. It was hard for me to grasp the concept of making such a large difference in so many people’s lives, but this little boy allowed me to grasp, for those few hours of the Dedication Ceremony, the idea of changing a life.